The release of the new MY22 400 and 600 series sprayers also bought with it John Deere’s first iteration of their smart spraying system, a result of Deere’s purchase of Blue River in 2017. The system uses cameras and AI (artificial intelligence) to identify weed plants, and apply herbicide only to the identified plant to control those weeds.
The See & SprayTM Select system consists of a boom mounted camera that controls two ExactApplyTM nozzles per camera to only fire when the camera detects a weed plant. The camera can control just one nozzle, for small weeds, or two or more for larger plants. This gives precise control of the nozzle, based on settings from the operator on the Gen 4 display in the cab.

Exclusively fitted to MY22 John Deere 400 and 600 series sprayers, See & Spray Select allows the operator to modify settings such as minimum spray length, nozzle overlap and sensitivity intuitively in the Gen 4 display integrated into the sprayer. The display also documents sprayed areas to give the operator and farm manager a visual and accurate record of areas treated with See & Spray Select, both on the display and in Operations Center on desktop or mobile device.
The camera detects the green colour of the plant against a non-green background. The camera commands the nozzle to open and spray herbicide on the plant. The operator controls the time, rate and distance the nozzle remains running for to give precise applications.

In this first release of See & Spray, the cameras will detect green plant colour on a non-green background, or in other words, a fallow paddock.
The system has been tested extensively in the US, Canada and Australia. In Australia, the system has been tested in summer stubble for winter crops. It has worked well, with a high degree of accuracy. There are twq operating modes, See and Spray Select single nozzle, and See & Spray and broadcast.

When in See & Spray broadcast mode, the See & Spray system is targeting bigger weeds with a higher rate, while at the same time applying a lower blanket rate to target smaller weeds over a wide area in the paddock. To do this, the system uses both the front and rear nozzles of the ExactApply system. When set to do See & Spray, nozzle B is applying herbicide using the camera to target weeds. When set to See & Spray broadcast, nozzle A applies a broadcast application, while nozzle A targets larger weeds using the camera system.

Being a camera system, there is a limit on the ground speed that it can operate at accurately, and so John Deere recommend that the sprayer is operated at less than 19 km/h when using See and Spray. As the cameras require light to detect plants, it is also recommended that See & Spray Select is used 30 minutes after dawn, and 30 minutes before dusk for the best results.

If you’d like to see the new John Deere 616R for yourself we have a demo unit on the Eyre Peninsula for a short time. Contact your sales staff for more info.

The John Deere 616R is now available to forward order. Limited units will be arriving in Australia in the coming months so we recommend acting early to secure your new sprayer. 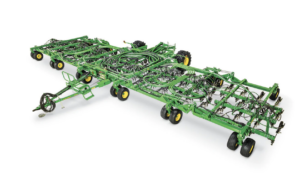 John Deere has introduced a new range of P600 Precision 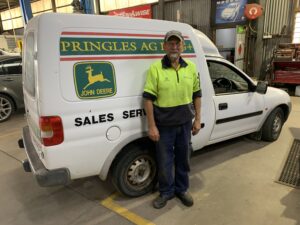 Greg McDonald’s retirement marks the end of an era.

48 years in the workshop After starting as a fresh

Transmission options for your small to mid-sized tractor.

Used in a wide variety of applications and available in

Grow your career with us. Technological innovation in the farming sector has seen a host of new and exciting career opportunities emerge within the agricultural industry.

Pringles Crouch is a John Deere dealership group with branches servicing the Eyre Peninsula and the Mid-North regions of South Australia.